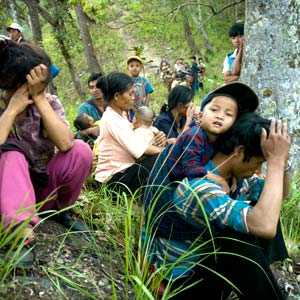 The Shan are one of the largest unreached people groups in Southeast Asia, spanning the golden triangle region of Northern Thailand, Burma, Southwest China, and Laos. They are a race related to the Thai and Lao, as part of the larger Tai peoples. The majority of the Shan people live in Shan State in Burma (Myanmar), where they are the largest minority group, making up 10% of the population. The Burmese military government tries to control and crush dissension among ethnic minorities, and the Shan have been a primary target. They have experienced massive destruction of property and life, causing an exodus of Shan refugees into Thailand, where they are not given refugee status by the Thai government. As a result, they have few if any rights, and are left with limited opportunities. Many work as hired day laborers or in dangerous jobs such as construction, agriculture, and factories. Many young Shan girls are trafficked across the border into prostitution and end up with AIDS. The Shan are truly a nation (people group) without a country.